Buenos Aires has an average annual temperature of 18ºC (64°F). Winters aren't too cold and summers aren't too hot, so any season of the year is a good time to visit the city.

You'll need to bear in mind that, as it's in the southern hemisphere, Argentina will have winter when Europe experiences its summer and vice-versa.

Summers in Buenos Aires are hot and humid. During the month of January, the average maximum temperature can reach 30.4ºC, while minimum temperatures don't usually fall below 20ºC. 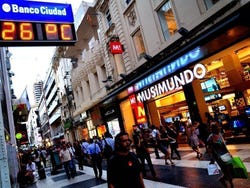